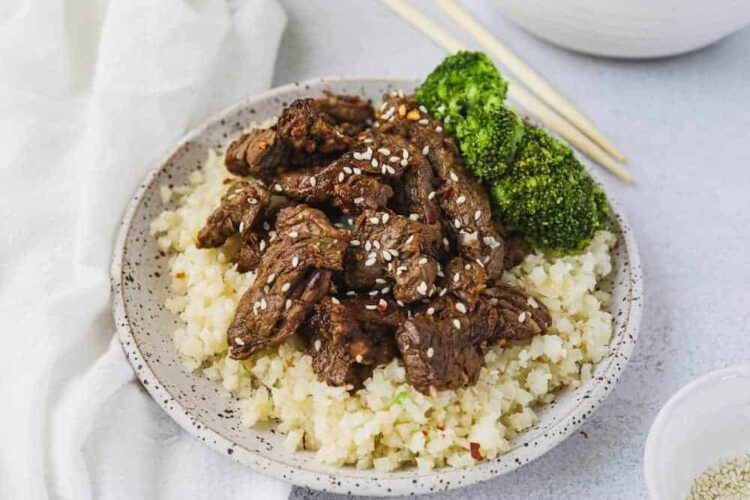 Does your love for Korean cuisine run deep? Good news! Low-carb beef bulgogi is totally possible, and fantastic, too. I had never tried to make beef bulgogi until recently, when I ended up with a whole flank steak in my freezer and zero creative ideas of how to use it. A blogger friend of mine had recently posted her own bulgogi recipe, and I was inspired to put a sugar-free version to the test.

This low-carb beef bulgogi is worth trying, friends. If you’re in search of easy keto dinner ideas, I hope you give it a shot.

The beef bulgogi is:

While this Korean-inspired dish is not authentic by any means, it’s still delightful and I tried to keep the recipe as close to a traditional bulgogi as possible.

what is beef bulgogi?

Beef bulgogi, sometimes known as Korean BBQ beef, is thinly-sliced and tender pieces of marinated beef, usually chargrilled (hence the term BBQ beef). The marinade is usually a balance of salty and sweet, made with soy sauce, sesame oil, sugar, and loaded with aromatics like ginger and garlic.

the best cut of meat

As I mentioned earlier, I was originally inspired to make this dish when I had a flank steak. It’s honestly not the best cut of meat to use, but it works okay as long as you marinade it for a while. Flank steaks are very lean and can be tough if they’re not prepared right. They also have less flavor than a cut that’s marbled with fat (like ribeye), so a long marinade = a more flavorful flank steak.

I also tried this recipe out with ribeye, which is what is traditionally used for beef bulgogi. You can use ribeye or any other tender cut of beef, like tenderloin or sirloin. The more tender the cut, the less time you need to marinade.

The difference? I’d choose ribeye over flank steak any day, but the flank steak was still great, tender, and had a really nice flavor. My husband actually liked them equally.

the marinade is everything

The marinade is where all the flavor is at, and what’s nice about this recipe is you can easily adjust this beef bulgogi recipe to your liking. If you prefer more garlic, add it. A sweeter beef bulgogi? Increase the monk fruit. I used part of a grated pear for sweetness and to tenderize the meat, but you don’t really need it. (I figured the sugar content of a third of a grated pear would be minimal enough to keep things low-carb, plus most of it is discarded along with the marinade). Tamari instead of traditional soy sauce makes this more low-carb and gluten-free. And instead of sugar, I used drops of monk fruit extract, an all-natural (one-ingredient) sugar substitute with zero carbs, zero grams of sugar, and zero calories.

Here’s what you need for the marinade:

If you’re using ribeye or a more tender beef cut to make this low-carb beef bulgogi, you can get away with marinading only 30 minutes, but I’d probably go for an hour. For a tougher cut of meat like flank steak, I’d marinate it at least two hours, only because a leaner cut has less flavor than a fattier cut like ribeye, so you’ll really want to taste that marinade.

how to make beef bulgogi

I know it’s kind of annoying to have to pat dry the meat before you cook it, but please don’t skip this step! If you transfer the meat directly to the skillet, all that marinade will cook out and you’ll end up with meat boiling in the marinade instead of browning. This is why it’s important to dry the marinade off if you want a nice, seared beef bulgogi. I promise, you won’t be losing any of that good flavor!

This might be one of my favorite keto dinner ideas, mainly because it’s so tasty and simple to make! Pair it with some cauliflower rice (YES to frozen cauli rice to make things really simple), a creamy cauliflower mash, or even this flavorful zucchini noodle salad for a fantastic low-carb meal!

Bonus tip: if you’re serving this with cauliflower rice, sautéing it in a few spoonfuls of that beef bulgogi marinade will make you happy. 🙂

This low-carb beef bulgogi is soo good, now I want to try it out with chicken or pork, too! Just to vouch for how tasty this beef bulgogi recipe is, I couldn’t keep my three-year-old daughter away from the beef to get enough photos. There she was, sneaking bites, chopsticks and all.

If you're using a leaner cut like flank steak, marinade it longer, at least two hours or more.

I like llinea monk fruit because it's a concentrated, one-ingredient sugar substitute and the liquid drops are ideal for a marinade. However, you can swap in erythritol or granulated monk fruit sweetener. I recommend using about 2 tablespoons.

Drying the meat by dabbing off the marinade with paper towels allows the meat to brown quickly in the skillet. If you skip this step, you'll likely end up with meat boiling in the marinade instead of browning in the oil.