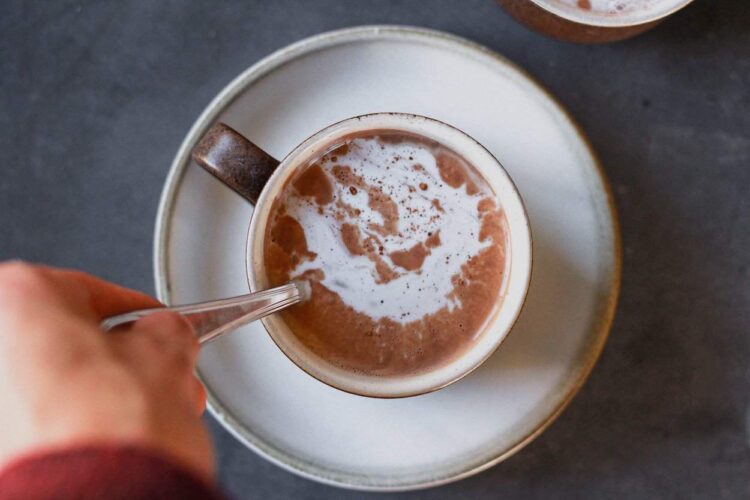 It’s officially winter break, which means my little kindergartner has exactly 17 days at home before he goes back to school, aka I need to up my game on how to keep him and his little sis entertained. I’m sure it will involve Christmas movies and baking and trips to the park, with mugs of this keto hot chocolate in between. It’s super creamy and chocolatey, and you’d never guess that it’s sugar-free or dairy-free. I’ve made it a few times this month and we always change up the toppings- cinnamon or coconut whipped cream or bits of chocolate. For the kids, marshmallows are not optional (perhaps for some of us big kids too), and now that my three-year-old has discovered marshmallows, she keeps sneaking into the kitchen cabinet to steal “just one.”

how to make keto hot chocolate

Did I mention how easy this is? Like, one-step kind of easy. Okay, two steps if you want a dollop of coconut whipped cream on top (and you do). I use a combination of unsweetened vanilla almond milk (if you want homemade, here’s an almond milk recipe you can easily make keto-friendly) with a can of full-fat coconut milk to make it creamy. Canned coconut milk is preferred since the coconut milk in a carton is usually thin and without that awesome coconut cream on top. This keto hot chocolate only requires five ingredients, which you combine in a saucepan and heat thoroughly, stirring every once in a while:

Optional ingredients include a dash of sea salt, a small handful of stevia-sweetened baking chips (for an extra rich keto hot chocolate), or a drop of peppermint oil for a minty, Christmastime cocoa.

To make the coconut whipped cream, I scooped the coconut cream off the top of a separate can of coconut milk, added a teaspoon of powdered monkfruit sweetener, and used a hand mixer to whip it until it thickened and light peaks formed. Note: it doesn’t get quite as stiff as regular whipping cream does, but chilling it in the fridge helps.

We’ll be here at home, getting our fill of Christmas movies and hot chocolate for the next 2+ weeks… and I’ll be enjoying every moment of it (well, most moments) before my big kid begins FULL DAYS of kindergarten (that’s a whole other blog post, send more chocolate). Cheers!

Rich and creamy keto hot chocolate made with coconut milk and almond milk. A sweet and decadent hot chocolate that is sugar-free and vegan!